St Manchan’s Shrine is one of the most remarkable survivals from Ireland’s medieval past, having been safely kept and venerated in the same locality since its creation in the early twelfth century. This masterpiece of medieval art is now proudly and reverently displayed in the rural parish church of Boher in County Offaly, not far from its original home at the ancient church site of Lemanaghan.

St Manchan’s Shrine is a gabled-reliquary, taking the shape of steeply pitched roof or tent, and is fitted with carrying rings, which enabled it to be carried in procession by two bearers using poles. It is not only the largest reliquary surviving from medieval Ireland but is also the only remaining example of its type. It enshrines what are believed to be the bones of its eponymous saint, St Manchan, whose death is recorded in AD 664.

The shrine can be confidently attributed to Mael Ísu mac Bratain Úi Echach, the craftsman who was responsible for the famous Cross of Cong (National Museum of Ireland), which he made in 1123 to enshrine a fragment of the Cross of Christ. Both reliquaries display similar animal ornament, a blending of Irish and late Viking art, as well as similar techniques, such as enamelling, openwork, extensive gilding, and glasswork. However, the figures on the shrine set it apart, with only eleven now remaining out of an impressive original total of fifty. While undoubtedly representing religious figures, their precise identifications are elusive.

Although kept locally at Boher, the shrine is internationally known, having been the focus of detailed academic study, as well as featuring in several international publications on Viking art. In 1979 it was brought to Clonmacnoise for the visit of Pope John Paul II, and the following year it was exhibited as part of a major international exhibition on the Vikings at the British Museum

A rich and dazzling Celtic bewilderment, a perpetual challenge to the eyes and a perpetual delight.  T.D. Kendrick (Archaeologia 86, 1936) 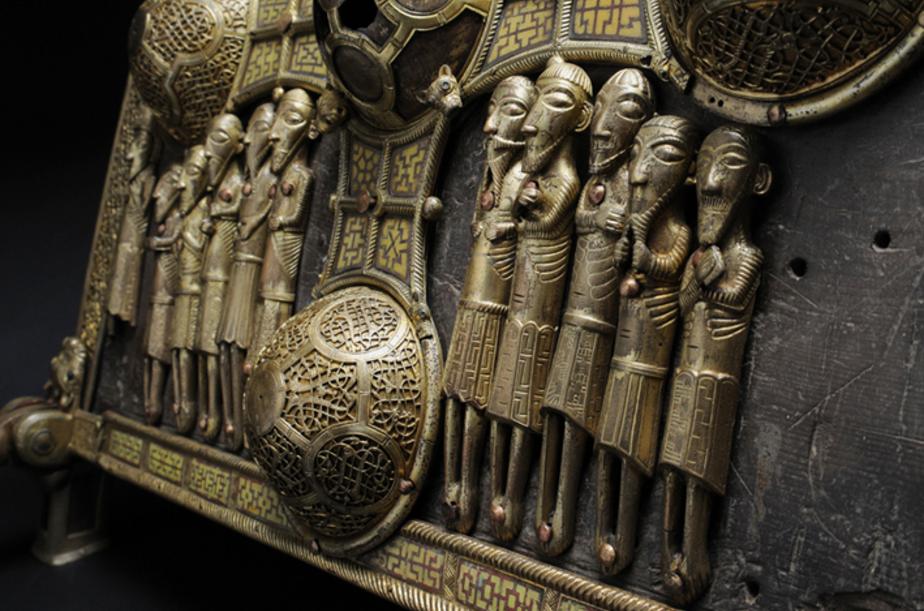